This is a picture of a very grand house in Yorkshire, called Castle Howard.

It is a bit of a misnomer, because as you can see it isn’t a castle at all.

There are no battlements or crenellations. It doesn’t have an outer wall, or a portcullis gate. It wasn’t built for defense or to hold a strategic position.

It was actually a Palace, but despite being so very grand, it wasn’t built for a member of the Royal family but for an Aristocrat. The Earl of Carlisle.

The Howard family is descended from the Dukes of Norfolk who had been influential since Tudor times and supported Henry VIII and plotted against Queen Elizabeth I (The one they make lots of films about).

This particular branch of the family became Protestants and were given the title Earl of Carlisle by Oliver Cromwell for supporting him in the English Civil War AGAINST the king. Then cleverly they backed the man who would become King Charles II, who was still in exile in the Netherlands and it was when he became King that the family fortunes took off and this house was built.

It wasn’t quite as grand at first but gradually bits were added until it became this pretty breathtaking palace.

It had been used for many films and it was also used for both the Television series and the later movie of Brideshead Revisited. 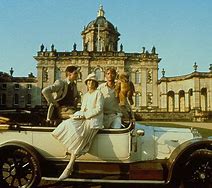 4 thoughts on “Picture of the Day – Castle Howard, Yorkshire”