A good blogging pal of mine, with the same name, Kristian, of Life Lessons from around the Dinner Table has tagged me in this challenge.

Apparently, this challenge started with The Eclectic Contrarian,

He posted a picture and challenged three people to write a story based on that picture. One of the people he chose was my friend Kristian. She, in turn, has posted this picture (See Below) and asked me to write my story, then pass it on. 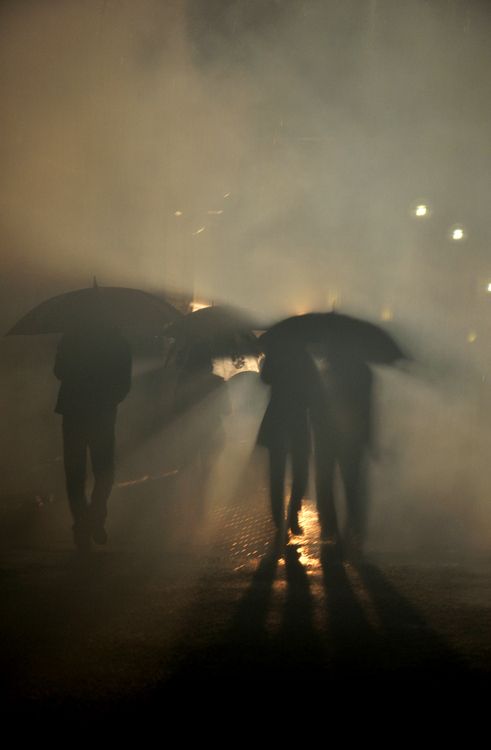 So here we go:

Love in the Rain

It was a typical wet January in the City of London and I’d just popped out of the office to grab a bit of lunch. The rain had eased off, so I just grabbed my raincoat, but left my umbrella behind, under my desk.

In the time it had taken for me to run into my favourite cafe, grab a Tuna Baguette and order my coffee to go, it had started raining again. Not the light, constant drizzle, but a downpour. The water was flowing between the cobbles, washing them clean, but I couldn’t stop to admire them. I was in a dilemma. I had to get back to the office, eat my lunch in time to give my presentation. So much for making a first impression, I was going to look like a drowned rat!

I must have had that ‘lost sheep’ look because someone came over, carrying a large golf umbrella. It was a guy I’d seen around the office but didn’t really know what department he worked in. He always said Hi, and had a nice smile. He was flashing those white teeth of his as he came over.

“Hi. It’s Lucy, isn’t it? Caught out without an umbrella?”

He seemed nice, and stating the obvious wasn’t a crime, so I forgave him for that.

“Yes, It had stopped raining when I came out, but obviously,  not for long. I’m sorry, I don’t know your name.”

“It’s Sam. Look, I’m just going pop in a grab a coffee, then how about I walk you back to the office? The umbrella’s big enough for both of us.”

“OK, thanks Sam” I was relieved. I wasn’t going to end up looking all bedraggled for my presentation after all. I probably wouldn’t have long to eat the baguette though.

As I waited for Sam to get his coffee, I went over what I had to say in my head. I had been given this project by my boss, to look at untapped marketing areas the company could exploit. If it went well, she told me, I could be looking at promotion out of it. That’s if the big boss liked it. I’d been at the company for six months and I’d never met the big boss yet. He spent most of his time at the New York office.

Sam had picked up an Americano and then we left together.

“Gosh, I love this country and all the rain. Don’t you?” Sam said.

“It’s OK, I guess, It’s growing on me” I replied. I had to admit that sharing an umbrella with a smart looking guy with a nice smile, wasn’t a bad way to spend a lunch break.

He walked me back to the office and we said goodbye at the lift. He was going to the top floor, whereas I went straight to the conference centre. Then I put all thought of him out of my head as I got everything prepared, taking sips of coffee and an occasional bite out of my baguette while I set the projector up.

At One o’clock, on the dot, the door opened and in walked my manager, Sandra, with a man who must have been the big boss. He must have been in his fifties. He had a businesslike, no-nonsense appearance. This wasn’t a guy who had time for anything other than work.

As I shook hands with him, a good firm handshake, he turned and introduced me to someone standing behind him. It was Sam.

“May I introduce my head of Marketing, Sam Greensmith. He’s who you’ll be working for if your presentation is as good as Sandra tells me it is.”

Suddenly, I felt a bit shy, but I managed to pull myself together.

The presentation went well. Overall, it had been a very productive afternoon.

I got my promotion and something else too.

They say you fall in love fastest in a rainstorm.

So, to continue the challenge, Here is a picture: