A Guy Called Bloke has set a challenge, to write a story or poem about a Valentine’s day card and a Cherub. Here is the post if you like to have a go:

Well, I don’t believe in Valentine’s day. I think it is a load of commercial rubbish. I won’t be taking part in it at all. Love is for 365 days a year not just for Valentine’s day. But I just can’t resist a challenge from that Guy Called Bloke, so here is a poem that should tug at the old heartstrings, and meet the requirements of the prompt. 🙂

He vowed never to send a Valentine’s card,

it was something he just wouldn’t start.

He was clear from the beginning

to his love, who was willing,

to accept that she never get a red paper heart.

On a cold wintry February day.

No chocolates in boxes

He’d made positively clear it just wasn’t his way.

Then he gazed down at the present she’d made him,

at the cot and the cherub inside,

He admitted that here,

was a love gift, most dear,

With this valentines present, he’s so happy, he cried.

Sadje of the Blog, Keep it Alive has tagged me in a Tell the Story Challenge, see the post here:

I believe this challenge was created by the Eclectic Contrarian, and so I would like to thank both of them, Sadje for tagging me and the EC for coming up with the concept.

Here is the picture that Sadje has chosen for me: 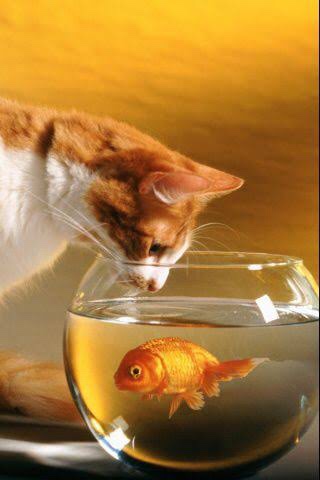 As the Marmalade Kitty Cat heard it’s humans’ car pull off the drive, he ran into the living room to look again at the new toy they bought.

Slowly he stepped up closer. “It sure look like goldie fish” thought Kitty.

Gingerly he sniffed at it. “It sure smells like goldie fish” Kitty thought.

It came as a revelation when Kitty pounced and knocked over the ornament that it was not a fish in a bowl at all! It was some plastic construct made to look and smell just like the real thing!

Kitty couldn’t comprehend who would manufacture such a cruel thing!

In order to make it clear that he was not happy, he left his humans a little coming home present on the mat.

So who shall I tag?

Kristian of Life Lessons from Around the Dinner Table

So you know the rules? Take the picture I provide and write a story, poem or anecdote about it, then tag three others and provide them with a picture of your own.

The most important rule is to have fun.

Also if you don’t fancy having a go, then that’s fine.

Here is the picture: Eleven months ago to this very day I started out on a journey.

I have always enjoyed writing but had never shared my writing with anyone in particular. I wasn’t ashamed of it, I just never believed anyone would be interested.

I have never been particularly into modern technology. I don’t walk around glued to my mobile phone. It doesn’t even connect to the internet!

If someone had told me a year ago that I was going to embark on this amazing voyage of discovery and construct my own blog, I would have laughed in their face.

If someone had told me that I would manufacture a blog and then still be going after eleven months, I would have thought they were insane.

This can’t really be happening? This can’t be me?

It is a revelation.

I wish to thank everyone who has read one of my posts and liked it for giving me the confidence and encouragement to keep me blogging.

Thank you to every one of my followers. I hope you still enjoy what I write and continue to do so.

Going forward, are there any requests for a story you would like me to write? Please leave suggestions in the comment. As Lydia gazed out from her beach hut she saw the sky get gradually lighter. It faded from an indigo sky to a resplendent array of colours. The clouds were a combination of pink and orange which heralded the coming of the sun, still just beneath the horizon.

Then the Sun emerged and the sea and sky were bathed with is glorious light. The sight was truly enthralling. For anyone else, it would Inspire them, but Lydia was troubled deeply by a problem she felt unable to surmount.

Turning back to the beach hut, she saw her new husband lying on the bed, face down and snoring his head off. It was their honeymoon but she already realised something; She’d married the wrong man.

Why that revelation had come so late, she couldn’t say. It made her feel so foolish.

He had appeared so charming and amusing. She had discovered only last night that it had all been a façade. He was incapable of loving anything or anyone. He was cold and ruthless. Someone who saw what he wanted and took it without thinking or caring about the consequences.

She had been engaged to be married when she’d met him. He had swept her off her feet. Bombarding her with presents. A gold Rolex watch, a night at the opera, a weekend in Monte Carlo. Stephen couldn’t have provided her with those things, he was just a Junior in the City and Daniel had been his boss.

Last night he’d admitted that he had deliberately set out to take her away from Stephen. He found her attractive, but it was because he’d felt threatened by Stephen and wanted to demoralise him totally. How better than to take away the woman that he loved?

The cold-bloodedness of it had chilled her to her very marrow. She couldn’t comprehend how anyone could think like that; behave like that. It made her feel so stupid that she had fallen for his act.

Then, while she was still reeling from his revelation, he had expected her to perform her ‘wifely duties’ like she was a new toy he had purchased. She had refused to cooperate but he had insisted on exacting his conjugal rights.

As he snored, she gazed at the razor on the floor. The salt from the sea stang the slight nick in her neck he’d made with that razor as he’d held her down. The sting was nothing compared to the agony inside.  She looked at the razor longingly. So easy to slice a vein and end this torment.

Suddenly she realised that her husband’s snoring had stopped. Breathing heavily, she looked at him, was he awake already? No, his eyes were closed. She heaved a sigh of relief, but then realised that all was not right. His chest no longer rose and fell. The colour in his cheeks was wrong. Then she smelt the vomit that told her he had choked on it. She rolled him on to his back. This monster that had filled her with so much pain, that had made her consider suicide only moments before, she paused but for a moment and then did what any normal human being would do. She ran to get help.

Was it wrong for her to hope, despite doing the right thing, she’d be too late?