My Blogging friend, Sadje of the blog, Keep it Alive, is posting a picture challenge. Click on the link:

The Boy was so proud of his new laptop, he’d worked hard to save the money for it and he couldn’t wait to show it to his family.

“Look what I’ve got Grandma”

“That’s fine, but does it make you happy?” She replied solemnly.

“Oh, Yes and It is full of knowledge and wisdom. It said that life is too short to spend it being unhappy, you should only do things that make you happy. Isn’t that very wise?”

The aged grandmother looked up and smiled.

The boy put down his computer and gave his wise old grandmother a hug.

Life; what you get out of it is

Integral to the amount of effort you put into it.

There are other factors that have an effect, but this one is fundamental and the only one we have any real control over.

Wisdom is easier to say than impart.

I decided to troll through some of my old posts and I found this story that I wrote some time ago. I thought I would share it with you again.

All the wise men had tried to save him but to no avail.

They had called upon the witchfolk of the wild woods and they came but could do nothing for him.

The men in white came down from their mountain and called down their powers to heal the wisest and noble of kings.

Nothing had worked. The King still lay dying. When your time came, no force either supernatural or natural could save you.

At the foot of the bed stood the kings three sons. The Eldest was a proud man. He prized strength and determination above all things. He was always victorious in war and generous in dividing wealth among his bravest knights.

The Second son was bookish and quiet. He prized learning and knowledge above all things. He would spend hours reading and hours debating among his followers who were all-wise and knowledgeable philosophers.

The youngest son was humble. He neither enjoyed war nor spending all day with dusty books or wrangling over philosophy. He loved nature and the ordinary people of the land. He enjoyed talking to the farmers and the millers and the craftsmen and women about the land. He walked in the woods and befriended the animals. He had no followers as such but was beloved by all who knew him. Including his noble father.

The King opened his eyes and looked at his sons. How could he leave his people in the hands of one of these boys? Each one possessed skills, but not one of them had everything necessary to be a wise ruler of the whole land. He knew that to be a great king you had to be strong and determined, knowledgeable and learned and also know and love the ordinary people and the land itself.

The King spoke to the assembled gathering. His sons, the healers and the councillors all dressed in their rich finery.

“I go to meet my maker. I bestow upon each of my sons a third of my kingdom for each to rule wisely as they best see fit.”

The noble king rested his head back on his pillow and closed his eyes. Within moments his laboured breathing ceased. The king was dead.

The three sons, now kings of their own kingdoms looked sadly at their father’s corpse. They had each loved him. For his strength, his knowledge and for his love.

“Well, I claim this Castle and the City and its surrounding land. This third will be mine” said the eldest. It was the best part of the kingdom, with the most wealth but with his Knights behind him, the other two brothers could not say no.

“Well, I will claim the towns to the north, with their mountain monasteries, their colleges and their libraries,” said the second son.

This left only villages, meadows and some wild places for the third son.

“Thank you, my brothers. Let us each go our separate ways and rule our own kingdoms” the youngest son said.

With love in his heart, he left the city and went to live with his people.

The three kingdoms did not prosper. It does not take great wisdom to see that they never could. They each possessed only one of the three things they needed to survive.

The youngest son’s kingdom was first to die. Crushed by the mighty armies of the eldest brother who used his strength and determination to take over more and more of the land. Although the young king had loved his people, he could not stand in the way of violence.

Then too, the second brother’s kingdom fell to the mighty conquering armies of the Eldest brother, for knowledge and learning are wonderful things but they cannot stand in the way of strength and determination.

When the Eldest brother held the whole kingdom in his hands he felt victorious but this kind of brutal conquering holds no victory. The kingdom disintegrated because without knowledge and learning and without love, a kingdom cannot survive. The strong preyed upon the weak and took everything, but there was less and less worth taking. The land decayed until there was nothing left but the bare bones for the crows to pick over.

This Kingdom no longer exists. It was destroyed long, long ago.

Only when Strength, Knowledge and Love co-exists in harmony can there truly be a kingdom worth living in.

I have been nominated for this challenge by Laurie at Meditations in Motion.

Check out her inspiring blog and read her post below:

This challenge was created by A Guy Called Bloke: 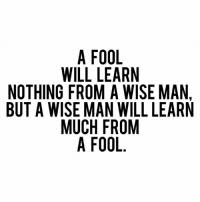 I would like to nominate anyone who would like to have a go at this. If you have an old saying, perhaps one that your Granny used to say, please either post about it or share it in the comments below.

I wanted to share some quotes with you all.

The first one is attributed to the great William Shakespeare.

On a similar vein: This one is unattributed.

“A wise man can see more from the bottom of a well than a fool can from a mountain top.”

“A wise man will take advice from a fool but a fool doesn’t listen to a wise man.”